The Mob Museum In Vegas: It Really Is An Offer You Can’t Refuse… 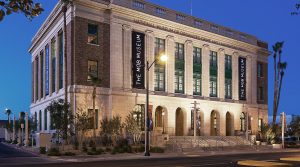 It’s official name is The National Museum of Organized Crime and Law Enforcement but it really is just known as The Mob Museum. And, is there any more appropriate a place than Las Vegas for it to be located in? The museum is open 9-9 every day except for Christmas and Thanksgiving and are three power packed and engaging floors of history, photographs and priceless memorabilia. For instance:

Here is what you can do on the first floor…

See the technology that had been developed since the 1970’s that has allowed law enforcement to begin to go after organized crime in a big way.

See if you have what it takes to bring down gangsters with your specialized weapons training.

Wander through history and get to know and understand the most vicious and notorious criminals in American history.

Take a tour through the history of crime as it has been portrayed and absorbed by pop culture.

And, of course, the gift shop where you can find anything and everything mobster.

Now, on the second floor…

Discover the history of Las Vegas and how it was built by the Five Families of the New York City Mafia and how they declared it would be an “open city”. 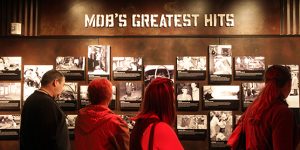 Wander through the violent mob history of Vegas and.. 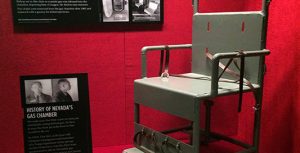 And, finally, on the third floor…

Find yourself in a actual lineup…

Understand what early 20th Century America was really like and how the culture was ripe for crime and violence.

See the actual brick wall from the Chicago storefront where the men who were murdered during the St. Valentine’s Day Massacre were propped up. After that day, Al Capone became the undisputed ruler of the Chicago underworld. 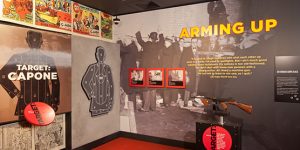 See how the FBI began and how the “G Men” began to fight fire with fire against the nation’s gangsters.